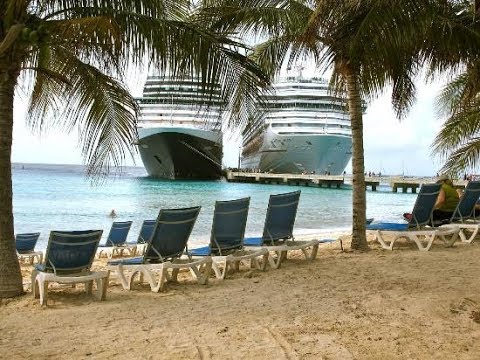 National Museum on Front Street
Cockburn Town is home to the Turks & Caicos National Museum, which is housed in the colonial-era Guinep House, on Front Street. The house is believed to be over 180 years old and much of its structural material came from local shipwrecks, including a ship’s mast, which is one of the building’s main supports. The site was donated to the Museum in 1990.[3]
Among the National Museum’s collections is an exhibit of shipwrecks, including the oldest known European shipwreck in the Americas, the Molasses Reef Wreck, dated 1505.[4]
Other exhibits detail the history of the Lucayans, the Space Race, Turks and Caicos postage stamps, slavery and the history of the slave trade, the sisal and salt industries, royal events, as well as a general history of the islands. The museum also maintains a garden, which is adjacent to the Guinep House.[5]
Also of interest are the museum’s research projects, including its Message in a Bottle Project, recording nearly 40 years’ worth of messages to wash upon the shores of Grand Turk.[6]
Her Majesty’s Prison[edit]
“Her Majesty’s Prison” on Pond Street was built in the 1830s and remained in operation until 1994. In addition to the main cell block and offices for prison officials, it hosts a bell tower and its own museum.[7]
Climate[edit]

MEETING MY AUSTRALIAN FAMILY FOR THE FIRST TIME! | TRAVEL VLOG

Playing Dream League Soccer (sorry for not uploading for 3…