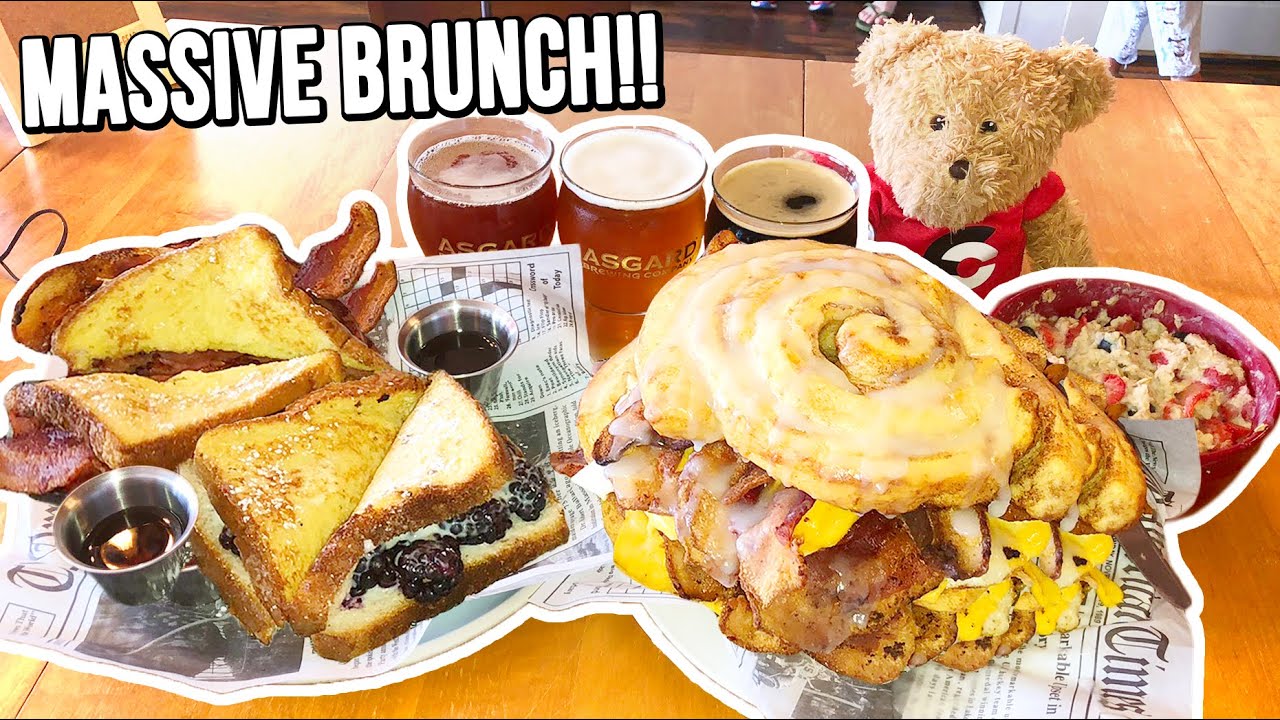 A&Z #858 – Randy Santel “Atlas” vs Lo-Town Brew’s Massive Brunch Food Challenge w/ a Cinnamon Roll Breakfast Sandwich at Lo-Town Brew in Loretto, Tennessee which is on the Tennessee and Alabama border!! For this video and food challenge, Lo-Town Brew collaborated with Asgard Brewing Company based out of nearby Columbia, Tennessee. After finishing up my food challenges in Oklahoma and Arkansas, I traveled east to Tennessee where I attempted lots of delicious food challenges as part of my 2020 Southeast USA Tour. I also attempted 2 just south of Tennessee in Hernando, Mississippi, and 1 just north of Tennessee in Tompkinsville, Kentucky. For event #4, I traveled to Loretto, TN and attempted the brand new “Brunch Punch” Food Challenge at Lo-Town Brew which just opened up in March earlier this year. I had 1 hour to finish all kinds of brunch deliciousness plus 3 pints of beer from Asgard Brewing Co. For the foods, there was a bowl of Southern Oats filled with healthy fruits, a French toast and bacon sandwich, some Stuffed French Toast, and a 4.5lb super-sized version of Lo-Town Brew’s signature Cinnabisc. I was trying to win my $75 meal free, a bag of ground Black Rifle Coffee, and the first spot on the Wall of Fame!! Thank you to owners Mandy & Eric with Lo-Town Brew, and John with Asgard Brewing Co. for all the wonderful food, drinks, and hospitality, and to everyone who came that day to watch and meet me!! I appreciate everyone around the Loretto, TN area and throughout the great state of Tennessee who watches our videos and supports our efforts!! There are 2 Hernando, Mississippi videos upcoming!!

– Lo-Town Brew opened up in Loretto, Tennessee earlier this year in March 2020.
– They are known for their signature Cinnabisc which is a cinnamon roll breakfast sandwich.
– They collaborated for this challenge with Asgard Brewing Company in nearby Columbia, TN.
– There is a bowl of Southern Oats (oatmeal) filled with 2 healthy fruits of your choice.
– There is a French Pig (French toast and bacon sandwich) plus some Stuffed French Toast.
– The Stuffed French Toast is filled with cream and another healthy fruit of your choice.
– The main feature of this challenge is the super-sized version of Lo-Town Brew’s Cinnabisc.
– There are 2 layers of bacon, eggs, and cheese, between 3 freshly baked cinnamon rolls.
– 1lb bacon, 8 eggs, and lots of cheese. The top cinnamon roll is smothered with icing.
– Challengers have 1 hour and must finish 3 pints of Asgard beers or 3 cold brew coffees.
– Winners receive the meal free, a bag of ground Black Rifle Coffee, and Wall of Fame.

Check out our FoodChallenges.com YouTube Channel and How To Videos:

FOOD CHALLENGE STRATEGIES & LOCATE AN EATING CHALLENGE NEAR YOU:

For Business Inquiries Only:
Atlas [at] RandySantel.com

THANKS FOR SUBSCRIBING & ALL OF YOUR SUPPORT!!

Thank You to our Food Production Workers!

How To Order Food Delivery In Vietnam

Even trolls need a tan and botox

Why You Don't Want Super Speed